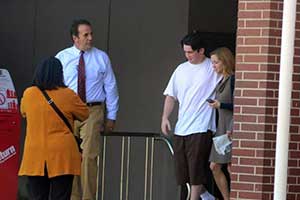 A Merced County judge on Friday formally dismissed a murder charge against the son of the Merced County district attorney, saying prosecutors failed to prove their case by a wide margin.

Ethan B. Morse, 18, the son of District Attorney Larry D. Morse II, had been accused of driving a getaway vehicle March 30, 2013, the night 18-year-old Bernabed Hernandez-Canela was shot and killed outside a large house party on Westside Boulevard near Atwater.

Morse’s co-defendant in the case, Jacob Tellez, 18, was charged as the shooter.

The California attorney general’s office prosecuted the case in light of the allegations against the Merced County district attorney’s son.

Judge Ronald W. Hansen on Friday determined the case’s prosecutor did not present enough evidence to show that Tellez fired a gun from Morse’s vehicle. The judge went further, however, taking the unusual step of making a formal factual finding that Tellez “did not fire a gun from the Morse vehicle on Westside Boulevard on the evening of March 30, 2013.”

The factual finding prevents prosecutors from refiling the case on the same evidence.

“Therefore, Mr. Morse, is not held to answer,” Hansen said in court. “Mr. Morse is released from custody.”

Larry Morse II said he always believed his son would be exonerated.

“We have known from the first that Ethan was innocent,” Morse said in a prepared statement. “Within a week of Ethan’s arrest an eyewitness to the crime was located who provided information on who the killers were and confirmed that neither Ethan nor Jacob Tellez were involved.”

Tellez was held to answer on charges of being a minor in possession of a concealed firearm and street gang participation. He is due back in court Dec. 5 for further proceedings.

Outside the courtroom Friday, Tellez’s father, Robert Tellez, said he hopes the people responsible for Hernandez-Canela’s death are found.

Morse was arrested July 22, about a week after Tellez was arrested. Morse came forward to tell investigators they had arrested the wrong man, that Tellez never fired a gun that night.

“He ended up putting himself in a bad position to help out an innocent kid,” Robert Tellez said. “He was the first kid to come forward to help, and he spent four months in jail for it. He should be commended for doing the right thing.”

Tellez’s attorneys, Adam Stewart and Larry Niermeyer, said they were pleased with the ruling and acknowledged surprise over the judge’s decision to make a formal factual finding in the case.

“That’s extraordinarily rare, but it is real justice,” Stewart said. “These kids didn’t do it, and it sends a clear message to the (Sheriff’s Department) that the people responsible for this crime are still out there.”

Niermeyer said the ruling showed the judge believed prosecutors and investigators put together a bad case. “They came up with a theory and then tried to present evidence supporting that theory and did not give any weight at all to evidence that would tend to disprove that theory,” he said.

It was unclear Friday whether state prosecutors would seek an appeal in the case. The attorney general’s office declined to comment.

Sheriff Tom Cavallero said he continues to “support the deputies, and the detectives in particular.”

In issuing his ruling, Hansen said statements from a key defense witness, Andrew Masengale, were more “credible” than the secondhand statements made by three other witnesses who were in the vehicle with Morse, Tellez and Masengale.

Barton Bowers, the deputy attorney general who prosecuted the case, decided not to have three key prosecution witnesses testify during the hearing. Instead, Bowers had detectives testify about the information those witnesses provided.

“Masengale testified in person and the court was able to evaluate his credibility,” Hansen said.

The idea of a taped confession was based on a 911 call made inadvertently from Tellez’s cellphone the night of the shooting. On the recording, deputies said, Tellez described shooting a man at a party on Westside Boulevard. But Hansen said he did not believe the 911 call contained any such confession.

“The court has listened to those tapes, both the enhanced version and the original version, and I cannot hear any admission of shooting in those tapes,” Hansen said.

In laying out his findings, Hansen explained that the court believed the tape actually showed more evidence of Tellez’s innocence because it appeared to corroborate Masengale’s testimony.

Masengale told the court Tellez tried to pull a gun in the backseat of the car but that the gun got stuck on a seat belt and Tellez couldn’t get the window rolled down. Masengale also said he grabbed Tellez’s arm to prevent him from shooting.

Hernandez-Canela was also shot at close range, less than 7 feet away from the gun, the judge noted.

Hansen also took issue with the prosecution theory that Tellez would have fired two deadly shots from the window of a moving vehicle, striking a running target on a dark and rainy night. Hansen said that theory “lacked credulity” and was “difficult to believe.”

When our son, Ethan, learned that Jacob Tellez had been arrested for murder in connection with the Easter shootings of 2013, he immediately told us that Tellez was innocent. He voluntarily, and without any legal counsel, met with detectives to tell them Tellez had not fired a gun from the car Ethan was driving and could not be guilty of these crimes. For having the courage to come forward to prevent a horrific miscarriage of justice Ethan has paid a terrible price. He was accused, arrested, lost his summer job, lost the college wrestling scholarship he had worked four years to earn, along with two years of college tuition that had been saved but was now being used to hire an attorney. He spent four months in a county jail, was unable to attend his grandfather’s funeral and has been subjected to unrelenting hatred from people who have no idea what the facts in this case are.

We have known from the first that Ethan was innocent. Within a week of Ethan’s arrest an eyewitness to the crime was located who provided information who the killers were and confirmed that neither Ethan nor Jacob Tellez were involved. Because of fears for his own safety, the witness refused to meet with detectives or make any statement. Consequently, Ethan’s attorney, Kirk McAllister, conducted the investigation that should have been done from the outset and established through the physical evidence the facts that led Judge Hansen to make a finding today that no gun was fired from Ethan’s vehicle.

Our hearts go out to Bernabed Hernandez Canela’s family as the individuals responsible for his death are still at large. The Sheriff’s Department knows who they are and, hopefully, will redirect their efforts to their arrest.

From the outset of this nightmare, I’ve never lost faith in the system and am most grateful to all those who have reserved judgment and allowed the truth to prevail.