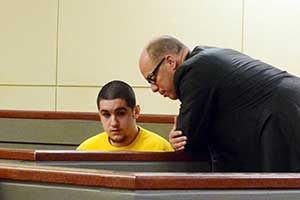 A 19-year-old man spent a night in the Merced County jail over the weekend on a warrant charging him with murder – a charge for which he’d already been declared innocent by a Merced judge.

Tellez was accused of murder in connection with the death of Bernabed Hernandez-Canela on March 30, 2013, at a large house party on Westside Boulevard near Atwater. Ethan Morse was charged as the driver of a getaway vehicle and Tellez was accused of shooting the victim.

Despite the fact that both men were cleared of wrongdoing by Judge Ronald W. Hansen, the warrant seeking Tellez’s arrest in the case was apparently never properly cleared from a law enforcement database, officials acknowledged Sunday.

Arrest ‘should not have happened,’ sheriff says

Tellez was stopped about 10:46 p.m. Friday by an Atwater police officer on a traffic violation on Bellevue Drive in Atwater, according to police records and Tellez.

“The officer said he wasn’t going to write me a ticket and just wanted to run my name, so I said ‘OK,’ and then like six or seven cops are there with all kinds of (guns) pointed at me,” Tellez said Sunday in a telephone interview.

Tellez said the officers told him the murder warrant was from July 2014 – the same warrant for which he’d already been declared innocent. He said he told the officers the case had been dismissed, but was told he’d have to wait for a court appearance.

Atwater police Lt. Samuel Joseph noted it’s common for defendants to claim innocence when they’re arrested and said the officers “did everything by established protocol.”

“They confirmed with dispatch that the warrant was active and they are absolutely required to go by that,” Joseph said Sunday.

Tellez was booked at the Merced County jail at 2:38 a.m. Saturday and given an “administrative release” at 11:23 a.m., according to jail records.

“They just gave me my stuff and said I could call for a ride. I asked if I could just walk out and they said ‘yes,’ so I just left,” Tellez said.

Tellez described his night in jail as “stressful.”

Merced County Sheriff Vern Warnke on Sunday acknowledged the error and said his office was examining “where the ball was dropped.”

“I will say this, it should not have happened,” Warnke said Sunday. “I will get to the bottom of this.”

The arrest came just two days after Tellez filed a claim for damages against Merced County, alleging civil rights violations in connection with the same case, according to his attorney, Adam Stewart.

Stewart described the timing of the arrest as troubling and suspicious.

Adding to Tellez’s concerns, he said, is that on at least two occasions since his release last year, law enforcement officials have checked his name for warrants and found no records.

Tellez said he wants to know why law enforcement agencies didn’t find any warrants until after he filed a claim for damages.

“They had multiple opportunities to clear this up from the time of the stop to the time he got to the jail,” Stewart said. “He didn’t need to spend almost 12 hours in jail on a mistake.”

The incident marks at least the second time attorneys representing Tellez and Morse have questioned the motives of Merced County law enforcement officials involved in the case.

Morse has also formally claimed his civil rights were violated and requested financial damages from Merced County for his time in jail.

In his claim, Morse said sheriff’s detectives “suppressed or egregiously failed” to act on information that could have cleared the defendants of wrongdoing and said his arrest was “malicious and politically motivated.”

The sheriff has said he cannot comment on any potential litigation, but has stood by his detectives and denied any evidence was suppressed by deputies.

How Tellez’s outdated warrant remained in the law enforcement database was unclear Sunday.

Warrant records and other bookkeeping issues have been documented in recent months in connection with a multimillion-dollar computer software system purchased last year by the Merced Superior Courthouse. Issues with the $2.3 million software have included problems processing warrant information, officials have said.

Warnke said he would not speculate on where the problem occurred until his office has had time to fully investigate the matter.

Linda Romero Soles, the court’s chief executive, said she did not have any information regarding the incident.