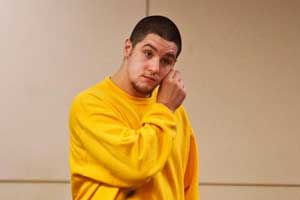 Merced County Sheriff Vern Warnke on Monday acknowledged his office’s responsibility for an apparent clerical error that caused a man to spend the night in jail on a murder warrant for which he had been declared innocent.

“He goes by ‘Logan’ and he goes by ‘Tellez,’” Warnke explained Monday. “When the officer was clearing the warrant out (of the computer database), he didn’t know about Tellez’s other name.”

Warnke said the warrant had two listings in the database, one for each name.“We’ve already taken steps to ensure this doesn’t happen again to anybody,” Warnke said. “Now they’ll be going by the warrant number only when taking care of these things.”

Tellez was found factually innocent of murder in November after a preliminary hearing. Tellez’s co-defendant, Ethan B. Morse, son of District Attorney Larry Morse II, was also found innocent during the same hearing.

Tellez was released from custody in January after state prosecutors dropped the final charge in the case, a weapons possession violation.

Tellez was stopped late Friday by an Atwater police officer on a suspected traffic violation. The officer checked with dispatchers for any warrants and found a record for the old murder warrant, Warnke said.

“The Atwater officer did everything by the book and the dispatchers did exactly what they’re supposed to do,” Warnke said, describing the issue as “human error.”

Jail records show Tellez was booked at 2:38 a.m. Saturday and given an “administrative release” at 11:23 a.m. after jail administrators became aware of the situation and confirmed the warrant was old and should have been deleted from the database.

Stewart said he is troubled by the fact that the warrant surfaced just two days after Tellez filed a claim for damages against Merced County in the case, alleging civil rights violations. Tellez has said he has been stopped by law officers twice since his release from jail in January, and no warrant records came up after they checked his name.

Warnke said it was possible other agencies did not check for records under both last names.

“The records show the warrant had been in there since July of 2014. It had nothing to do with that claim,” Warnke said. “We didn’t even know he’d filed one.”

Warnke described the situation as “serious” and “unfortunate.”

“We never want anyone in custody when they have no legal reason to be there ever,” Warnke said. “I am sorry for Mr. Tellez, and we’ve already taken the steps to prevent this from happening in the future.”

The issue will likely surface again during anticipated federal lawsuits in the case. Morse’s claim for damages has been rejected by the Merced County Board of Supervisors and Stewart acknowledged Tellez’s claim will likely be rejected.