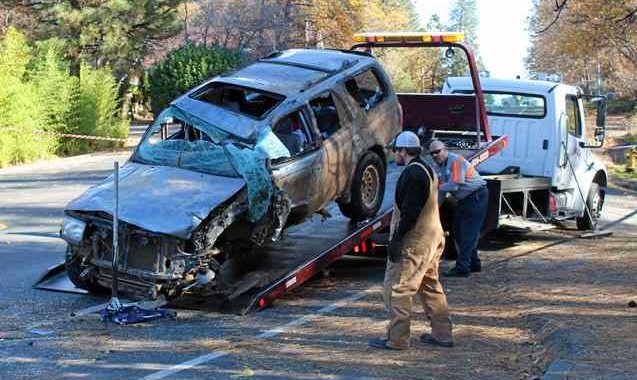 The town of Paradise announced Friday morning it had reached a final $3.1 million settlement on 11 of 12 claims against the town in a fatal traffic accident Nov. 26, 2015, that was followed by a Paradise police officer shooting an alleged DUI driver who subsequently died.

In mid-October, Town Attorney Dwight Moore had announced it had reached a tentative agreement with the estate of Andrew Thomas, the driver who was shot by then-Paradise police officer Patrick Feaster.

To get the agreement, the town needed the Thomas estate to settle a lawsuit brought by the estate of Darien Ehorn, who was killed in the accident, and have all claimants agree to settle the case in its entirety.

According to the agreement, $300,000 will be paid from the Thomas estate to Ehorn’s son Kolbi through his guardian Brent Ehorn, who is his grandfather. That was approved by Judge Micheal Candela on Dec. 19.

The remaining $2.84 million will be evenly split between Thomas’ mother, Victoria Rose Woodward, and his father Edward Thomas. How that money will be disbursed among the remaining claimants is up to Thomas and Woodward, once they provide a release to the town, which Moore said has been done.

“We didn’t view their claims as having a right to money under law,” Moore said. “But how the (parents) decide how to distribute the money is their right.”

The Ehorn Estate received no settlement money directly from the town because the town was not responsible for her death.

The town will actually pay just $50,000 in the settlement, the rest coming from the town’s insurance companies.

Thomas was shot by Feaster as he exited his vehicle, which had rolled over and killed Ehorn, 23. Thomas died Dec. 19, 2015.

Feaster was found guilty of involuntary manslaughter in October and is serving 180 days in county jail. He will also have three years probation.

The town also announced the Thomas estate also settled with members of Ehorn’s family in connection with her death.

In a statement released by the town, Mayor Scott Lotter expressed regret for the “tragic series of events.”

“Town and police representatives pride themselves on honorably serving all citizens of the town of Paradise,” Lotter said. “As Mayor, I Scott Lotter, speak on behalf of the Council when I say that I am proud of our Paradise Police Department representatives who so faithfully and professionally serve the citizens of our Town.”

The one claim the town denied was made by Kolbi’s father, Christopher Hernandez, and appears headed for court. On Thursday, he filed suit in Butte County against the town. The town was unaware of the lawsuit until the Post informed them.

Moore said the town denied Hernandez’ claim in July because the courts had awarded custody of the boy to the Ehorns. Additionally, Moore said the town questioned the validity of his marriage to Ehorn. Because of that they felt he lacked legal standing.