Scott Peterson Won’t Give Up Laci’s Insurance Money, Despite Conviction 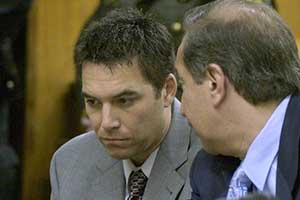 Modesto, CA (LifeNews.com) — Scott Peterson is refusing to give up his claim on a $250,000 insurance policy on Laci, despite being convicted for killing her and their unborn child Conner. Peterson is fighting California law which prohibits people who kill their spouses from claiming insurance payouts.

As a result, attorneys for Laci Peterson’s mother, Sharon Rocha, filed paperwork Tuesday with the Stanislaus County Superior Court to turn over the money from the insurance policy.

Adam Stewart, Rocha’s attorney, told the Modesto Bee newspaper, “You can’t murder or slay your spouse and then say, ‘Hey, I want the life insurance.’”

The Petersons took out the life insurance policy on June 25, 2001, about 18 months prior to Laci’s disappearance and death.

The Principal Life Insurance Co. of Des Moines, Iowa, made a deposit with the court system more than a year ago of $256,429, the value of the policy plus interest.

Peterson defense attorney Pat Harris filed papers with the courts last year agreeing that proceeds from the policy should be used to pay for Laci Peterson’s estate, which Rocha administers. However, he says Scott Peterson doesn’t want to relinquish his rights to the insurance policy because he is appealing his conviction on the double murders.

Peterson was found guilty by a jury in November and sentenced to the death penalty in March.

Judge Roger Beauchesne will hold a hearing on the insurance dispute in September.

The Peterson case has prompted a number of states to enact unborn victims laws protecting pregnant women and authorizing prosecutors to charge criminals who attack them and kill or injure their unborn children with two crimes.

Abortion advocates oppose laws protecting pregnant women because they oppose making the unborn child a second victim in statute and claim that such laws will curtail legal abortion.