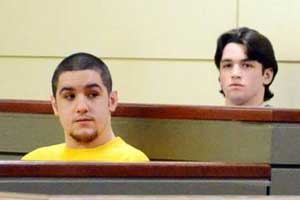 A judge on Monday heard testimony from detectives and a forensic pathologist in the murder case involving defendants Ethan B. Morse and Jacob Tellez.

Morse, 18, son of District Attorney Larry D. Morse II, has pleaded not guilty to murder and denied any gang involvement in connection with the March 30, 2013, shooting death of 18-year-old Bernabed Hernandez-Canela, who was one of three people shot and killed that night at a large house party outside Atwater.

Morse is accused of driving the alleged getaway vehicle. His co-defendant and the alleged triggerman, Tellez, 18, has also pleaded not guilty to murder.

Monday’s proceeding in Judge Ronald Hansen’s courtroom was a preliminary hearing, which is held to determine whether ample evidence exists to put a defendant on trial.

Detectives believe the killing was a drive-by shooting. The victim was struck by five bullets from two different guns, according to Mark Super, a forensic pathologist who testified Monday.

During Monday’s hearing, Super said at least two of the bullets struck the victim’s vital organs, and another entered from behind Hernandez-Canela’s right ear, traveling underneath his skull and into his brain.

He also testified that the wounds from the bullet that entered from behind the victim’s ear also showed signs of “gunpowder stippling,” what he explained are markings consistent with guns fired at anywhere from “several inches to a few feet away.”

Hernandez-Canela also had several abrasions and bruises on his face – the chin, left cheek and lips. Super said those injuries were likely suffered from the victim falling face first. The bullet behind the victim’s ear could have been the final shot after he had fallen on the ground, Super testified, saying it’s not inconsistent with the evidence.

The judge also heard from three Merced County Sheriff’s Department detectives who relayed the stories they gathered from witnesses at the party.

Witnesses in the car said Morse drove a dark-colored Toyota Highlander to the party, according to detectives, but the witnesses gave different statements about how many people were in the car and where they sat.

The group was at the party for only a short time when they decided to leave, detectives said. As they got into Morse’s car, several shots rang out, striking two partygoers who were in the backyard of the house.

Detectives have said they believe Tellez then pulled a gun from his waistband and fired at Hernandez-Canela, who was running past Morse’s car at a distance of five to seven feet.

Detective Jose “Sam” Sanchez testified that he interviewed Robert Tern, who rode with Tellez and Morse to the party in Atwater. Sanchez said Tern changed his story of the events on the night in question. For example, Tern at one point told detectives no shots were fired from the car, but later said Tellez pulled out his pistol and fired twice from the passenger’s seat.

Lawrence Niermeyer, Tellez’s defense attorney, noted that Tern, who is Southeast Asian, does not speak English as his first language. He also noted that Tern told the detectives he was “hammered” the night of the party.

Niermeyer asked Sanchez whether those factors led to often repeating questions to Tern. The detective said he asked questions repeatedly because Tern was not answering them. “It wasn’t that he didn’t understand me,” Sanchez said.

Both Niermeyer and Kirk McAllister, Morse’s attorney, accused the detective of threatening Tern with arrest if he didn’t say Tellez fired shots. McAllister played an audio excerpt of the more than two-hour interview Sanchez conducted with Tern.

“At this point, you’re really testing my patience,” Sanchez is heard saying on the recording. “This is where it counts. I don’t want to put cuffs on someone who doesn’t need them.”

In the courtroom Monday, Sanchez said he was not threatening Tern, but believed he was lying.

Sanchez said Tern was being questioned in a portable building outside a sheriff’s station, and Tern was free to go at any time during the interview. McAllister pointed out that at the end of the interview, Tern tried to leave but officers detained him using handcuffs.

Sanchez said Tern was never arrested and was released later that day.

Barton Bowers, the deputy attorney general prosecuting the case, also questioned Sanchez, who noted that each time he “challenged” Tern, he gave up more information.

Sanchez also testified that Tellez admitted to having a gun that night, but said he never fired it. Sanchez said Tellez claimed he pulled out the gun but it got snagged on a seat belt before one of the other passengers, identified as Andrew Masengale, stopped him from using it, Sanchez said.

Morse and Tellez are set to appear again in court at 10 a.m. Wednesday.

Samantha Parreira, 16, and Matthew Fisher, 19, also died at the party in the 9200 block of Westside Boulevard. Jose L. Botello and Jose M. Carballido, both 19-year-old Atwater residents, are accused of killing Parreira and Fisher at the party. Fisher and Parreira were shot in the backyard of the home and Hernandez-Canela was shot a short distance down the road from the home.

Detectives have said the deaths of Fisher and Parreira were separate from the death of Hernandez-Canela.

Botello, the suspected gunman in the deaths of Parreira and Fisher, has denied shooting anybody, saying his arrest is a case of mistaken identity. Botello and Carballido are due back in court Nov. 14.

Both cases are being prosecuted by the California Office of the Attorney General because of the allegations against the Merced County district attorney’s son.

All four defendants remain in custody.