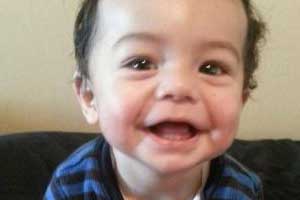 The child, Maddix Ramsour, suffered major blunt-force injuries March 5 at his home in the 30000 block of Cottonwood Road in Gustine.

“Obviously the whole investigations unit played a role in this case and the desire to seek justice of Baby Maddix kept everyone going,” Hale said.

Shelton said he could not elaborate on the nature of the injuries, citing a need to protect the ongoing investigation.

The mother, speaking through sheriff’s investigators, declined to comment on the case Tuesday.

Shelton said Sanchez and the mother were living together. Sanchez has another child, a 4-year-old girl, with another woman. That child was present during the incident that led to Maddix’s death, deputies said.

Shelton said investigators had to wait for the results of a variety of medical reports before an arrest decision was possible. He said he could not comment on the nature of the tests or their results.

The case was under review Tuesday afternoon by the Merced County District Attorney’s Office. Sanchez is scheduled to be arraigned by Wednesday afternoon, according to Harold Nutt, chief deputy district attorney.

“So a decision of some kind will be made by that time,” Nutt said Tuesday in a telephone interview.

Sanchez remains in custody at the John Latorraca Correctional Facility on $1 million bail, according to booking records.