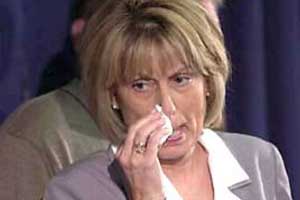 The mother of Laci Peterson has filed a civil lawsuit that seeks to bar double-murder defendant Scott Peterson from making a profit in the slayings of his wife and unborn son.
In a lawsuit filed Friday in Stanislaus County Superior Court, Sharon Rocha asked a judge for a preliminary injunction that would transfer any income from her son-in-law to a protected trust, which would later go to her daughter’s beneficiaries.
“This is intended to prevent any waste of proceeds or profits that would be received by defendant,” said the lawsuit filed by Rocha’s attorney, Adam Stewart of Modesto.
The order sought by Rocha would prevent Scott Peterson from “expending, disbursing, transferring or otherwise utilizing such incomes, funds or assets without the express authorization of the court,” the suit said.
A hearing on the lawsuit has been set for Jan. 23.

Such lawsuits are commonly filed by relatives of a homicide victim to block defendants from profiting in the case through payments for media interviews or movie and book deals.
California had what was known as a “Son of Sam” law which required felons to pay their victims any money they got from selling their stories. But in October, the U.S. Supreme Court denied review of a lower court’s ruling earlier last year that found the law to be an unconstitutional suppression of free speech.
The state Legislature has since passed a law, effective last January, that gives victims of serious crimes more time to sue criminals for damages and does not single out income from books or movies. The law extends the deadline from a year after a criminal conviction to 10 years after the felon’s parole period has ended.

Scott Peterson, 30, has pleaded not guilty to charges he murdered his pregnant wife, 27, and their unborn son. If convicted, he faces the death penalty. A preliminary hearing has been scheduled for Oct. 20 in Modesto.
The impending hearing comes as one of Peterson’s attorneys, Matt Dalton, has left the defense team. Lead defense attorney Mark Geragos of Los Angeles has declined to say why Dalton left his firm.
In May, Dalton had suggested to reporters that Laci Peterson’s family was burglarizing the couple’s home in Modesto when relatives removed various items,
including her wedding dress.
The rift between the families further widened when Scott Peterson’s parents,
Lee and Jackie Peterson, voiced frustration that they were not invited to a private funeral in August where Laci Peterson and her unborn son were laid to rest.